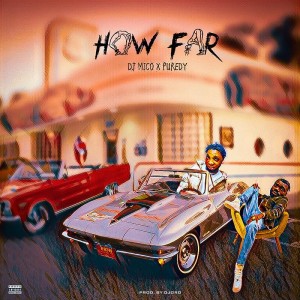 Following the success of ‘Call On Me’ which was released last December, “DJ Mico” is ready to set the street ablaze with the release of his new hit single “HOW FAR” which features ‘PUREDY’ an indigenous rapper who raps exactly like Olamide Badoo.

“HOW FAR” is a street anthem by sensational Nigerian international Dick jockey, DJ Mico which features Puredy, a versatile and multi-talented rapper from Nigeria. A lot of fans have been anticipating the release of this hit single since it was sampled by DJ Mico on his Instagram live, Some fans have been dropping different comments on his social pages asking for the release of this hit single “HOW FAR” which was produced by Ojoro.