“When people are Rac1st towards you, you begin to wonder why you are Black” – Episode 1 of Chat with DestinyPiz 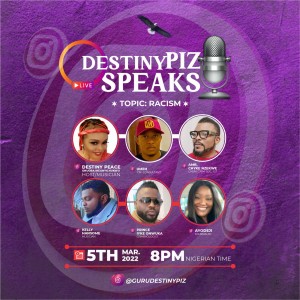 From those who live outside the country to those who have never left the shores of Africa, everyone must have experienced Racism in one form of the other, directly or indirectly. That’s why on the first episode of Chat with DestinyPiz, the topic was one of the most controversial and emotional topics….Racism.

In a chat with the Host; DestinyPiz, who is an artiste, Model and talkshow enthusiast, so many areas of this topic was touched by Prince Iyke Onwuka; a Criminologist, Ayodeji; a Premium times Journalist and Umeh; a PR Consultant.

From Kids who are unaware of what’s going on in the world to adults who have seen it all, everyone has experienced this scourge that is not only dehumanizing, but can be likened to a global pandemic that has refused to be wiped off the surface of the earth.

In an interactive Chat with DestinyPiz, the host and speakers tried to tackle this issue by looking at the cause, implications and how to reduce this scourge to a bearable minimum.

The speakers had things to say, some pierced like an arrow like when Iyke, a Criminologist said

“When people are racist towards you, you ask yourself “Why was I born in Africa?”

“If I wasn’t born in Africa, maybe I would have gotten ahead in this world”

When someone who has been affected gets to this stage of reasoning, then you can only imagine what they’ve been through. The host DestinyPiz also gave a practical example where a white child used racial slurs on a black child in United Kingdom, and the black child started saying she wished she is white. Destinypiz also pointed out that racism is maximum hatred for minimum reason or for no reason. She said it is not enough for us to be non-racist but to be anti-racist.

When DestinyPiz asked if Racism is learnt/taught, Iyke also said Some kids who are racist either pick it up from their parents or learn from things their see and watch. Umeh, a PR Consultant later said since we have White supremacists who believe they’re superior, they must also pass this thought process to their kids.

Ayodeji who is a Premium times journalist also said that historically Blacks suffered racism the most because of Slavery, but encouraged people to grow a thick skin so as not to allow low self esteem permit people to push them to the wall.

There was a question about if our government is to blame about racism, and Ayodeji said it has nothing to do with the government as it’s beyond that. Umeh also had this to say about that;

“We can say our government has a little role to play with respect to how we are treated racially, but even if we have everything going on well here, there would still be racism.. Things like your black skin, intonation and even things that are not from you can lead to racism. There are many points that contribute to this, but there is no one point that is the sole reason for racism.

The chat ended with words of motivation to anyone out there experiencing this, encouraging them to stay strong, as well as a shun on those engaged in racial act.

There was also a call on relevant authorities to totally frown on racism and implement punishments that will deter people from doing it.

This weeks conversation will be about fuel scarcity with speakers like; Ilemona Onoja

Legal Practitioner/Public Affairs Commentator, Samuel Adedeji who is a Product Marketing Expert and into policy Advocacy and others. Do well to join in.